Multan Sultan is a Twenty20 franchise cricket team and it was formed in 2017 to add another twist in the HBL PSL. Sultan is an Arabic word which means authority and it stands for those rulers who were powerful and strong enough to rule over the world and also independent.

It’s home ground is Multan cricket Stadium and its capacity is 35000 people. So read this post till end, because we are discussing here Multan sultan squad in details.

The Multan sultan team is basically based in Multan and was formed in 2018 to complete the Pakistan Super League. This team’s purpose is to bring excitement an entertainment for the people of the region and create a significant mark in the tournament. PSL 2020 Schedule

The team coached by Tom Mody. Wasim Akram is the team director while Nadeem Khan and Haider Azhar play their roles as GM- Cricket Operations and Team’s manager respectively.

ALL ROUNDERS OF MULTAN SULTAN

In overseas players of Multan Sultan Six players are used and their names are given below:

Multan Sultan played 10 matches whereas they won 4 and lost 5. That’s why their overall percentage is 44.44% and they got the 5th position in PSL2018. so, psl team ranking wise Multan sultan will be on 5th position. PSL Lahore Qalandar 2020

No, any psl title won by Multan Sultans, due to this will be new psl team that will be launch in psl 4 edition, but now this psl team playing this upcoming psl session in 2020. Islamabad United Squad 2020 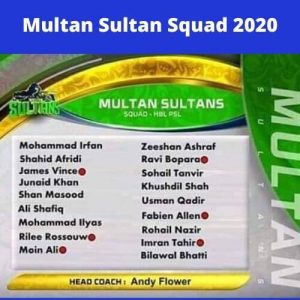