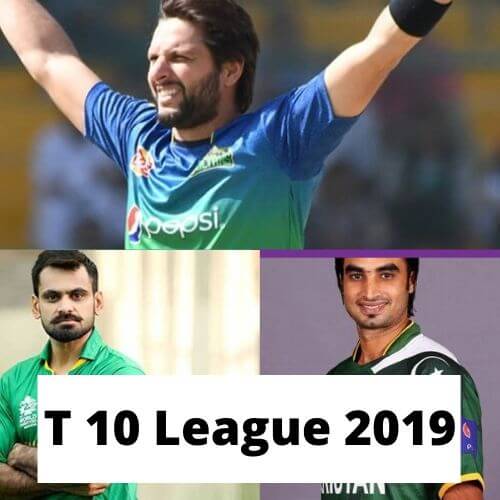 Today latest news update about T 10 league has been announced for the good news for the Pakistan cricket fans and especially boom boom & Imran lovers that is Shahid Afridi, Imran and Hafeez has joined the t 10 league 2019.

Here in this article, we will be discussing the complete details with confirmed news about the most famous Pakistani player’s Boom Boom Shahid Afridi, Imran Nazeer, and M-Hafeez has been joining the t 10 league.

Almost a few days before the Pakistan Cricket Board ( PCB ) has been canceled the Pakistani Players NOC, so many cricket fans very disappointed when hearing this news.

Also, PCB demanded to Pakistani players whose wanna played t 10 league 2019, then they give 1 Million rupees then PCB allow to playing this league otherwise not.

Now, today amazing and good news announced that now t 10 league joined by Pakistani Players, but these three main players of Qalandars have been done as players drafting, so for more confirmation on 14th November 2019.

Shahid Afridi ( Boom Boom ) is one of the most famous players of cricket history, and he is a dangerous player all over the cricket history. Many Bowlers felt fear to facing the boom boom Afridi, even that he is the game-changer 🤗  🤗  🤗

Here Shahid Afridi in T 10 league 2019 has joined as the captain of Qalandars Team ( Rana Fawad ), and doing his responsibilities as captaincy. Also, all boom boom lovers will be happy to know this that now Boom Boom Joined Lahore Qalandars in PSL 2020.

The other most dangerous player was Imran Nazeer of the cricket history, he doesn’t play international matches, but playing different cricket leagues such as PSL, CPL, Quaid-e-Adam trophy, T 10 league etc.

The Strike rate of Imran is very high because he played fast cricket means to say siexer game, so wanna hitting six to each and every ball, does matter he faced anyone or dangerous bowler.

Muhammad Hafeez is one of the experienced player, also he famous with the professor. So, he joined the Qalandars to playing the T 10 league 2019,

In the last session of T 10 league 2018, he was the captain, but unfortunately, he injured and out from the league, so now he again joined and select for t 10 league drafting 2019 as a senior player.

Hope, this latest update and news for cricket lovers and especially for t 10 fans are very interesting and informative, so if you like this post then share with your friends and colleagues.

Recent Articles For  You